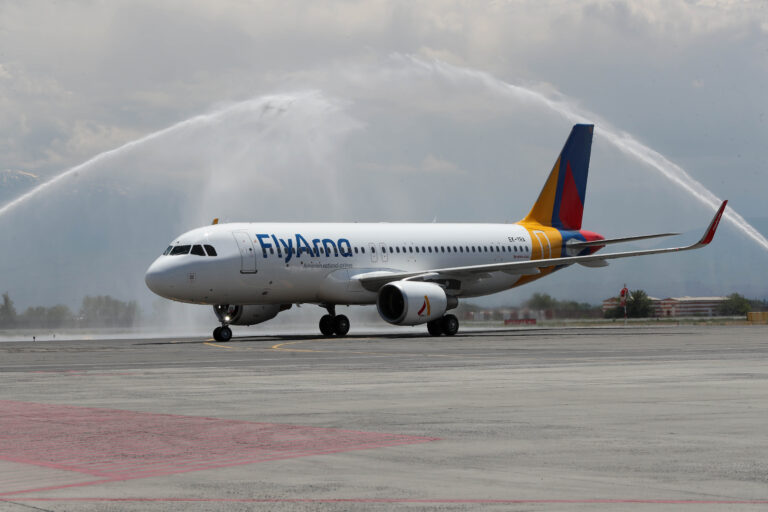 During a speech at the ceremony, the Prime Minister, said: “Our political commitment was to enforce changes in the field of aviation, also to ensure that more planes had the Armenian flag colors on their board. And today I am glad that we have this opportunity, I congratulate all of us on this occasion, as the Government of Armenia, the Armenian National Interests Fund, with the participation of our partners of Air Arabia are launching this airline. I hope that Fly Arna will bring more people in and out of Armenia, and Armenia will become a crossroads from where people travel and return, where they come for tourism and take with them a part of Armenia, and a positive attitude towards our country.”

Tigran Avinyan, Chairman of the Board of ANIF, said: “We are proud to launch Fly Arna today after months of hard work and dedication. The arrival of the first aircraft to its new home base at Zvartnots International Airport is considered another great landmark to celebrate and an important step on our journey towards starting our operations. We are looking forward to working in strategic partnership with our stakeholders to cater the growing aviation and tourism industries in Armenia and to providing an exceptional passenger experience to travellers”.

David Papazian, Chairman of the Board of Fly Arna and CEO of ANIF emphasized the new standards Fly Arna will introduce to the industry in Armenia. “It is the first time in the history of independent Armenia that we have a national airline fully compliant with all international standards, that is a fully commercial, competitive business entity. Liberalization of the industry, and ensuring affordable connection of Armenia to the world was the most important aim of the reforms of the sector that started a few years ago. Fly Arna is one of the most important achevements of these reforms”.

Adel Al Ali, Group Chief Executive Officer, Air Arabia, added: “Today’s milestone is the first step of marking the beginning of a new era for Armenia’s aviation sector.  We thank our partners, the Civil Aviation Committee, and all the teams whose hard work and commitment have led to achieve this milestone. Fly Arna will offer its customers value-added air travel services while contributing significant value to the economy by boosting the tourism, hospitality, and business sectors. We are looking forward to adding more destinations to Fly Arna’s network in the near future.”

During the ceremony, Fly Arna has also announced the launch date of its first commercial flight that will mark the launch of its flight operation. Inaugural flight G6501 will take off from Zvartnots International Airport to Hurghada International Airport in Egypt on July 3, 2022. Fly Arna launch destinations will also include direct flights connecting Armenia with Sharm El Sheikh in Egypt and Beirut in Lebanon (pending approval). Flights are now open for sale and customers can book their flights by visiting Fly Arna’s website, calling the call centre or through travel agencies.

Fly Arna operates the Airbus A320-200 aircraft, the most modern and best-selling single aisle aircraft in the world. The aircraft is configured with 174 seats and therefore providing added comfort with one of the most generous seat-pitch of any economy cabin. The aircraft is also equipped with “SkyTime”, a free in-flight streaming service that will allows passengers to stream a wide selection of entertainment directly to their devices.

Fly Arna was formed following an agreement by ANIF and Air Arabia Group to establish an independent joint venture company that will operate as Armenia’s national airline with Zvartnots International Airport as its hub. Fly Arna follows Air Arabia’s low-cost business model which means that carrier will operate short to medium haul flights and focusing on efficiency in managing its operations while providing passengers with a reliable and value-for-money experience.